We saw that a point P on a number line can be specified by a real number $$x$$ called its coordinate. Similarly, by using a Cartesian coordinate system named in honor of the French philosopher and mathematician René Descartes (1596—1650), we can specify a point P in the plane with two real numbers, also called coordinates. $$\left( {x,y} \right)$$

A Cartesian coordinate system consists of two perpendicular number lines, called coordinate axes, which meet at a common origin $$O$$, as shown in the figure below. Ordinarily, one of the number lines, called the $$x$$ axis, is horizontal, and the other, called the y axis, is vertical. Numerical coordinates increase to the right along the $$x$$ axis, and upward along the $$y$$ axis. We usually use the same scale (that is, the same unit distance) on the two axes, although in some of our figures, space considerations make it convenient to use different scales. 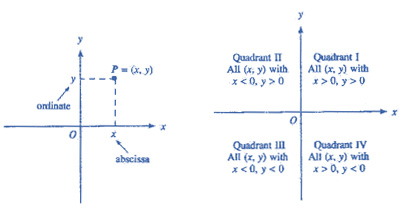 If you liked what you read, please click on the Share button. It really helps us a lot.